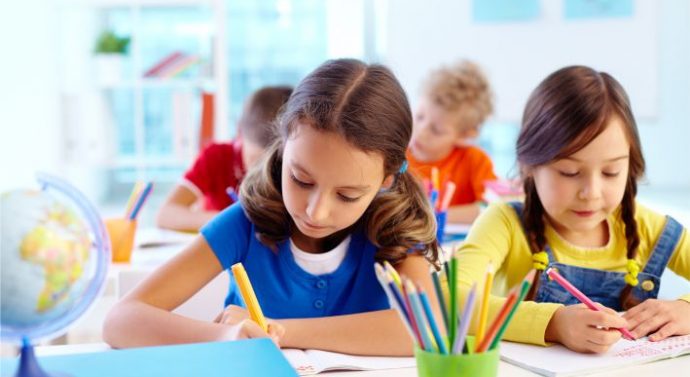 The education system in the US includes four levels of education: primary, secondary, higher and postgraduate.

The student’s assessment of a particular subject is based not only on the test results but also on the attitude towards learning, participation in class life, etc. State exams are SAT and ACT – general academic tests on general abilities, knowledge of mathematics and the level of language skills that are both introductory to colleges and universities.

Graduates of schools working in the US education system receive a diploma of High School Certificate. This diploma is recognized by the universities of the USA and Canada. From the 9th to the 12th grade, students are preparing for the final examinations, after which they receive the High School Graduation Diploma.

There is also a special 13 class – Advanced Placement Program. It is for those who wish to study more deeply the subjects on which specialization in the university is planned. Graduates of this class can be enrolled immediately to the second year of the university. Further, those wishing to obtain higher education can enter colleges or universities, where they receive for four years, a bachelor’s degree.

High Schools is aimed at enrolling in colleges in the US and Canada, business schools and other universities. The diploma is internationally recognized and awarded after the end of the senior four years of secondary school. Mandatory condition – students must be over 18 years old until September 1 of the year in which they finish their studies.

Students enrolled in this program must pass the SAT or ACT in the 11th or 12th grade, and if English is not their native language, they must pass a TOEFL or IELTS test in grade 12. Students should receive about 100 credit hours for each subject, also, they must recruit 20 to 24 credits (depending on the state) to gain access to higher education.

Academic loans American students start earning since the 9th grade. The education system assumes the accrual of one loan for each successfully surrendered subject. In total, you need to recruit 20-24 credits (depending on the state) to become a holder of a diploma.

In the 12th grade of High School, it is possible to choose a course for the in-depth study of high school subjects in the United States. This is the program Advanced Placement. The results of the training on AR give preferences when enrolling in 90% of the universities of the United States, Canada, Britain and even more than 50 states. American universities do not want to accept applicants who have passed the AP for an assessment of less than three on a five-point system. But with the transfer of subjects to “excellent”, there is a chance to get priority even when enrolling in Princeton, Harvard and Yale universities.

Basic levels and degrees of higher education in the USA

In addition to the traditional bachelor’s, master’s and postgraduate courses and the corresponding degrees, American universities offer a significant number of combined programs, after which you can get several degrees and diplomas at once.

Combined programs are perhaps one of the most striking differences between American higher education and the educational systems of other countries.

Degrees of education in US universities

Also, US universities can assign degrees with an indication of the subject area: after graduating from bachelor’s, master’s or postgraduate courses in a pedagogical school, the graduate will receive a professional degree BEd/MEd/DEd and so on. Professional degrees are fewer than subject areas, but still quite a lot.

In addition to the traditional US programs, there are several types of combined programs that are sometimes mistakenly considered a special kind of degrees:
• Joint degrees, JD – training in two universities within the framework of one program.
• Double / dual degrees – obtaining two diplomas within the framework of one program.
• The degrees that graduates of combined programs receive are traditional, but they are assigned in two, in certain combinations, depending on the program. Read more about this in the material “Programs of US universities for the most motivated.”

The main goal of combined programs is to raise specialists who are ready to work in different countries of the world, to develop international cooperation of universities, to help students reduce financial costs and time spent on training.

What program and degree should I give as a preference? The decision depends on the reputation of the institution and the quality of its programs, as well as the career plans and personal interests of the student.